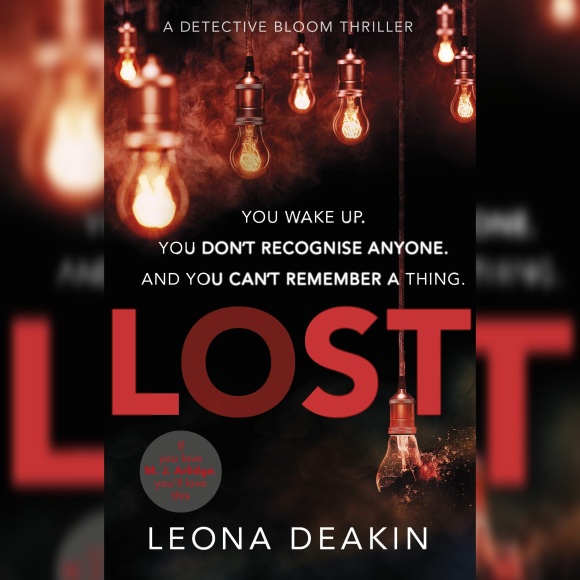 Today is my stop on the blog for for the second book in the gripping Dr Bloom series. Thank you to Anne at Random Things Tours for the invitation to take part and Transworld Publishing and Netgalley for the eBook ARC.

HOW CAN YOU SOLVE A CRIME IF YOU CAN’T REMEMBER THE CLUES?

There is an explosion at a military ball. The casualties are rushed to hospital in eight ambulances, but only seven vehicles arrive. Captain Harry Peterson is missing.

His girlfriend calls upon her old friend Dr Augusta Bloom to support the investigation. But no one can work out if there is a connection between the bomb and the disappearance.

When Harry is eventually discovered three days later, they hope he holds the answers to their questions. But he can’t remember a single thing.

Without any clues, will Dr Bloom find herself lost in this puzzle too?

“As he walked up the stone stairway, Captain Harry Peterson had no idea that time was running out. In less than an hour, a bomb would rip this building apart.”

The follow up to Leona Deakin’s sensational debut literally starts with a bang when a bomb explodes at a military ball. Captain Harry Peterson is injured and taken away in an ambulance only to disappear. His girlfriend calls her old friend Dr Augusta Bloom asking her to help her find him and investigate if there is a link between the bomb and his disappearance. When Harry turns up 72 hours later he is unable to answer their questions and can’t remember anything from the last four years. Can Dr Bloom solve the mystery of the bomb and Harry’s missing memory with no real clues?

From that first line that had me on the edge of my seat, I was sure I was in for a riveting read. Gone was one of my favourite books last year so I was thrilled to finally have my hands on the follow up. If you haven’t read the first book don’t worry, the author succinctly catches you up on events in the first few pages. However I recommend reading it because it’s so good.

Once again Deakin has crafted a layered and intricate plot that keeps you guessing right until the end. She expertly lulls you into thinking you’ve got it all figured out before pulling the rug from under you with surprising revelations that change everything you thought you knew. Just like her debut, it is clear that Deakin knows her stuff when writing about matters of psychology and the brain. I found learning more about how memory works and can be affected fascinating and have come away feeling like I’ve been both educated and entertained. The pace did slow down a little about quarter of the way through but after a while it picked up again and I was on tenterhooks as we raced towards the finale.

Augusta and her colleague, Marcus Jameson, have a different dynamic in this installment after the events of book one but I still enjoyed both of them and it was interesting to see how they worked together under different circumstances. And as much as I enjoyed them both, for me the best character was Karene, Harry’s girlfriend. The love, passion and commitment she had for Harry radiated from the pages and their love story had me smiling from ear to ear. She is also fiercely intelligent and I would have liked to have seen more of her expertise shown. Maybe I’ll be lucky and she’ll return in another book.

Lost is clever, exciting and addictive. The perfect read for those who like a thriller without the gore.

Leona Deakin started her career as a psychologist with the West Yorkshire Police. She is now an occupational psychologist and lives with her family in Leeds.

Thanks so much for the blog tour support Emma x