Welcome to my stop on the blog tour for this sensational thriller. Thank you to Bookouture for the invitation to take part and the gifted eBook ARC.

One by one the girls disappeared…

When the frail body of a teenage girl is discovered strangled in a parking lot, shards of ice form in Detective Natalie Ward’s veins. As Natalie looks at the freckles scattered on her cheeks and the pale pink lips tinged with blue, she remembers that this innocent girl is somebody’s daughter…

The girl is identified as missing teenager Amelia Saunders, who has run away from home and her controlling father. Natalie’s heart sinks further when it becomes clear that Amelia has been working on the streets, manipulated by her violent new boyfriend Tommy.

A day later, another vulnerable girl is found strangled on a park bench. Like Amelia, Katie Bray was a runaway with connections to Tommy, and Natalie is determined to find him and track down the monster attacking these scared and lonely girls.

But when a wealthy young woman is found murdered the next morning, the word ‘guilty’ scrawled on her forehead, Natalie realises that the case is more complex than she first thought. Determined to establish a connection between her three victims, Natalie wastes no time in chasing down the evidence, tracing everyone who crossed their paths. Then, a key suspect’s body turns up in the canal, a mole in Natalie’s department leaks vital information and everything seems to be against her. Can Natalie stop this clever and manipulative killer before they strike again?

An unputdownable crime thriller from an Amazon bestselling author that will have you sleeping with the light on. This gripping rollercoaster ride is perfect for fans of Angela Marsons, Rachel Abbott and Rachel Caine. Prepare to be totally hooked!

“Look around you. Do you really know what dark secrets your neighbour or your husband or your daughter are hiding? You judge people by how they look or how they seemingly live their lives, but if you could spend an hour in my shoes and really see what goes on, you would be horrified. Truly horrified. “

The discovery of the body of a teenage girl is the start of a new investigation for DCI Natalie Ward and her team. Amelia Saunders is a teenage runaway who worked the streets and was found strangled to death in a car park. Just a day later, the body of another vulnerable teenage girl is found on a park bench. Katie Bray was also a runaway who worked the streets and had connections to the same man thought to be Amelia’s pimp. But when the body of a wealthy woman is found with the word ‘guilty’ written on her forehead, the team is forced to reassess everything they thought they knew. As they search for a connection between her and the other victims, Natalie and her team are in a race against the clock to find their killer before they strike again.

Carol Wyer has done it again. This fast-paced, layered thriller was impossible to put down. In the seventh installment in the Natalie Ward Series we see a happier, more settled Natalie in her private life. But professionally, things are as intense and crazy as ever.  Natalie has recently been promoted to DCI, with Lucy Carmichael taking over her old role, and she and the team are still getting used to the new dynamics. There’s some tension in the ranks, Lucy feels unsure of her abilities, and someone is leaking information to the press; all while they are hunting a clever, confident and methodical killer and a case that keeps throwing up surprising developments at every turn. The pressure is as the body count increases and they race to stop the killer.

As with all Wyer’s books, this is skillfully written and had me hooked from the first page. I found this one impossible to predict, keeping me on my toes and then knocking me for six with the big reveal. I feel like with each book she just gets better and better, proving why she is one of my favourite authors and her books are ones not to be missed.

Seven books in, I know Natalie and her team well, and I really enjoyed seeing a happier and more settled Natalie this time. I liked her and Mike together and she deserves a bit of a break. I liked that we also finally got some answers about why she is estranged from her sister, Frances, and am looking forward to seeing where the author takes that in the next book. Compelling, tense, intricate and twisty, Somebody’s Daughter is a spectacular thriller from a series every crime lover should read. And, please, someone pick this up for a TV series already!

Winner of The People’s Book Prize Award, Carol Wyer is a best-selling author and stand up comedian who writes feel-good comedies and gripping crime fiction.

A move to the ‘dark side’ in 2017, saw the introduction of popular DI Robyn Carter in LITTLE GIRL LOST, the #2 best-selling book on Amazon, #9 best-selling audiobook on Audible and Top 150 USA Today best-seller.

A second series featuring DI Natalie Ward quickly followed and to date her novels have sold over 750,000 copies and been translated for various overseas markets, including into Norwegian, Italian, Turkish, Hungarian Slovak, Czech and Polish.

Carol has been interviewed on numerous radio shows discussing ”Irritable Male Syndrome’ and ‘Ageing Disgracefully’ and on BBC Breakfast television. She has had articles published in national magazines ‘Woman’s Weekly’ featured in ‘Take A Break’, ‘Choice’, ‘Yours’ and ‘Woman’s Own’ magazines and the Huffington Post.

She currently lives on a windy hill in rural Staffordshire with her husband Mr Grumpy… who is very, very grumpy. 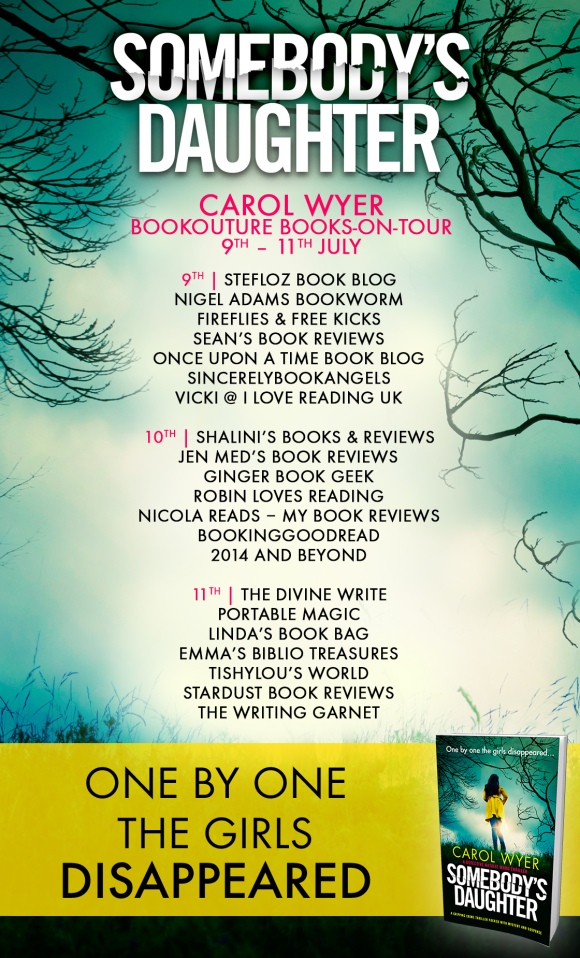