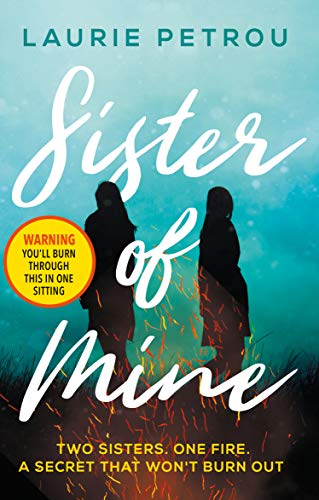 Two sisters. One fire. A secret that won’t burn out.

The Grayson sisters are trouble. Everyone in their small town knows it. But no-one can know of the secret that binds them together.

Hattie is the light. Penny is the darkness. Together they have balance.

But one night the balance is toppled. A match is struck. A fire started. A cruel husband killed. The potential for new life flickers in the fire’s embers, but resentment, guilt and jealousy suffocate like smoke.

Their lives have been engulfed in flames – will they ever be able to put them out? Steeped in intrigue and suspense, Sister of Mine is a powerhouse debut, a sharp, disquieting thriller written in stunning, elegant prose with a devastating twist.

“Two girls and a match, but a world of differences in what it looked like after that. A forest fire of debt”

This is a claustrophobic story of two sisters both held together and torn apart by a terrible secret and explores how the ripple effect of one decision lasts for decades, impacting both sister’s lives in ways they never imagined.

I was quickly drawn into the dark world of sisters Penny and Hattie Grayson. Their lives have been far from easy: their father left town when they were very young making them outcasts tarnished by his misdeeds, their mother died not long after Penny leaves for college and she has to return to look after her younger sister and Penny’s charming husband Buddy revealed his true colours and abused her. It was shocking to me how much they had been through by the time they were 18 and 21, which is their ages at the time of the fire.

They are very different people. Penny is stoic, reserved, untrusting, lacking in confidence, prefers to keep to herself, feels the weight of their shared secret and lies they have to tell. Hattie is sociable, carefree, confident, trusting, willful, manipulative and seems unburdened by their secret. These differences contribute to the love/hate relationship they’ve always had. They are trapped in a cycle of protection and debt. It’s them against the world but they are both full of such resentment and it’s toxic. Throughout the book the same feelings return over and over in different situations wrapping the sisters up in yet more secrets and more bitterness. Can they escape the sins of the past, break the cycle and mend their broken relationship? Or are they doomed to a life of heartache and to leave a trail of ruin in their wake?

I generally found our narrator Penny to be a sympathetic character. The author wrote her so well that I could feel what she did through the pages: her shame after their father left, her frustration at being made responsible for her younger sister, her complex feelings for her, her all-consuming love for Buddy and her devastation as it turned to fear of him, how terrified she is of their secret being revealed and her struggle to lie and keep up the facade. Penny has always felt trapped in her life and tried to break free. First by leaving for college but she was dragged back by her mother’s sudden death, and then by leaving Buddy, but he found out and threatened not only her life, but her sister’s too. She had no way out. No options. Not until the desperate plan to free herself was born.

This compelling, sinister, raw and heart-wrenching story is a skillfully written and gripping from the first page. It is full of twists and turns and will surprise you right until the end. It is a magnificent psychological thriller that I highly recommend.

Thank you to NetGalley, NoExit Press and Laurie Petrou for the chance to read this novel in exchange for an honest review.