Welcome to my spot on the blog tour for this compelling debut. Thank  you to Peyton at Agora Books for the invitation to take part and the gifted copy of the novel.

Over a decade ago, Heidi was the victim of a brutal attack that left her hospitalised, her younger sister missing, and her best friend dead. But Heidi doesn’t remember any of that. She’s lived her life since then with little memory of her friends and family and no recollection of the crime.

Now, it’s all starting to come back.

As Heidi begins retracing the events that lead to the assault, she is forced to confront the pain and guilt she’s long kept buried. But Heidi isn’t the only one digging up the past, and the closer she gets to remembering the truth, the more danger she’s in.

When the truth is worse than fiction, is the past worth reliving?

An addictive thriller about a case gone cold and the dangers lurking on our doorsteps, Monstrous Souls will have you gripped to the very end.

“It had been a policewoman who had eventually discovered them – not on an illicit camp-out as they had assumed, but a devastating scene of death.”

At thirteen-years-old Heidi was the lone survivor of a brutal attack that left her hospitalised, her little sister missing and her best friend dead. She has no memories of that day or her life leading up to it. Now, just over a decade later, small fragments of memories are beginning to reappear. As Heidi tries to put the pieces of her past together she finds herself in danger from those who want to keep the truth about that night hidden. But she is determined to find out what happened. Whatever the cost.

Monstrous Souls is a pacy, gripping and layered thriller that was hard to put down. The story moves between the dual timelines and multiple narrators as we are given glimpses of events leading up to the night Heidi was attacked and follow her fifteen years later as she begins to regain her memories. As terrible truths are slowly unveiled it is soon clear that there is much more to the events of that night than anyone first imagined.

In this novel the author doesn’t shy away from the exploration of deep and difficult subject matters. She examines our psychology, the things we hide from the world, our deepest secrets and fears, and the effects they have on our actions and relationships with others. She also tackles the difficult subject of abuse with sensitivity, avoiding graphic descriptions while still managing to convey the full horror and depravity. She also shines a light on the reasons victims stay quiet, the guilt they feel and the long-lasting effects of abuse exploring if there are fates that can be worse than death.

“I don’t want to think about these places, about this other life she has to endure… what I have seen in the photograph seeps through me like a toxin.”

For me the characters are a vital part of any book and the characters this author created were authentic and compelling. I found Heidi to be a very sympathetic and likeable character with an interesting character arc as her memories returned. We witness a seemingly fragile woman emerge into someone with great strength. In the flashbacks we witness the usual teenage angst and squabbles with her best friend become something much more serious when Nina confides in her. Heidi is filled with turmoil as she’s torn between the solace and security of her home and wanting to help her friend escape her private hell. We watch her anguish over how to help and if she should betray her friend’s confidence to do so. Nina is definitely the character I had a soft spot for. Between her awful homelife, the horrors she endures and the knowledge that she is brutally murdered so young, I desperately wished I could save her. Her sorrow, anguish and desolation lept from the page and left me heartbroken.

While I enjoyed all the different perspectives, the mysterious and sinister person stalking Heidi provides some of the best narration of the whole book and his story arc was probably the most nuanced of them all. When his identity was revealed I learned that all my predictions were wrong and my jaw hit the floor.

Monstrous Souls is a sensational, twisty and riveting debut that will have you hooked from start to finish.

Rebecca Kelly was brought up with books but denied the pleasure of a television. Although she hated this at the time, she now considers it to have contributed to a life-long passion for reading and writing.

After a misspent education, Rebecca had a variety of jobs. She’s spent the last years raising her children but has lately returned to her first love – writing.

Rebecca lives in the UK with her husband and youngest son and an over-enthusiastic black Labrador, who gives her writing tips. 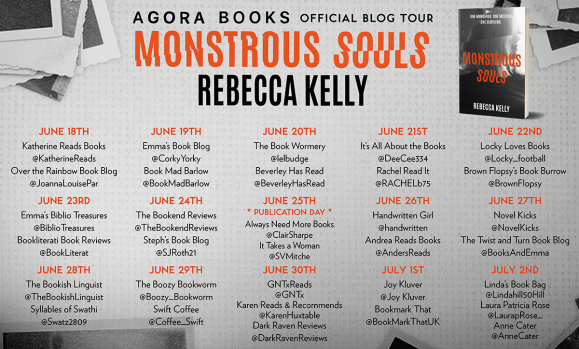 One reply on “Monstrous Souls by Rebecca Kelly”