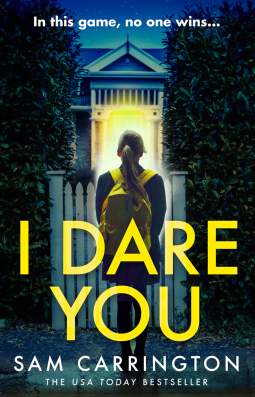 AN INNOCENT GAME. A SHOCKING CRIME. A COMMUNITY FULL OF SECRETS.

Two little girls were out playing a game of dares. Only one returned home.

The ten-year-old told police what she saw: village loner Billy ‘Creepy’ Crawley dragged her friend into his truck and disappeared.

No body was found, but her testimony sent Crawley to prison for murder. An open and shut case, the right man behind bars.

The village could sleep safe once again.

Anna thought she had left Mapledon and her nightmares behind but a distraught phone call brings her back to face her past.

Now he’s out of prison looking for revenge. The question is, who will he start with?

What a roller-coaster ride! I was quickly gripped by this exhilarating thriller and found myself reading fervently, desperate for answers about what happened to ten-year-old Jonie Hayes, how the narrators were connected to it all, and what secrets the residents of Mapledon were hiding.

The story is told in dual timelines and is narrated by two women – Anna and Lizzie. We soon learn that both women lived in Mapledon as children but left for very different reasons: Anna because of bad memories of her childhood friend’s murder and feeling stifled, and Lizzie because she was taken and put into care for unkown reasons. They both have unanswered questions about what happened thirty years ago and have been affected by the legacy of Billy ‘Creepy’ Crawley and the murder of Jonie. As they look deeper it is clear that nothing is as it seems and are forced to question everything they thought they knew as they unearth secrets they were never meant to find…

This was the second book I’ve read by this author and I was every bit as captivated as when I read The Missing Wife, cementing her place on my must-read authors list. The thing I liked about her writing in this book was how she told the flashbacks to 1989 in reverse chronological order up until the highly anticipated big reveal. This slowly revealed clues to the reader while increasing the tension and slowly revealed the roles everyone played in the tragic events.

Anna and Lizzie were both unreliable protagonists by their own admission. They were children thirty years ago and it is their fuzzy recollection of events that leads them to finally search for the truth. Anna’s relationship with her mother Muriel is fraught and she’s hasn’t been back to Mapledon once since she left. It seems with every day more cracks appear in their relationship and Anna is increasingly sure her mother has lied and hidden the truth from her about what had happened that summer. I definitely had my feelings about Muriel’s character coloured by Anna and only ever saw her as a busybody that was lying to her daughter. I was sure she was entrenched in what happened and felt like screaming at her to just tell her daughter what she knew. Lizzie was a character I had a lot of empathy for but I was torn about how much of the truth I wanted her to discover, especially as it seemed she had the most she could lose by the revelations. All of the characters in this book are fractured and troubled and I often wondered if they would be torn apart even more by the truth rather than healed by it.

I Dare You is a tense, twisty, jaw-dropping thriller about childhood friendships, small town politics, secrets and murder. I guessed some of the twists early on but so much was a mystery to me as we approached the end. The author cleverly wove the clues together until the full picture emerged and rendered me speechless. I would highly recommend this book to anyone who loves psychological thrillers and can’t wait to see what she writes next.

Thank you to Avon Books UK and NetGalley for the copy of this book in exchange for an honest review.