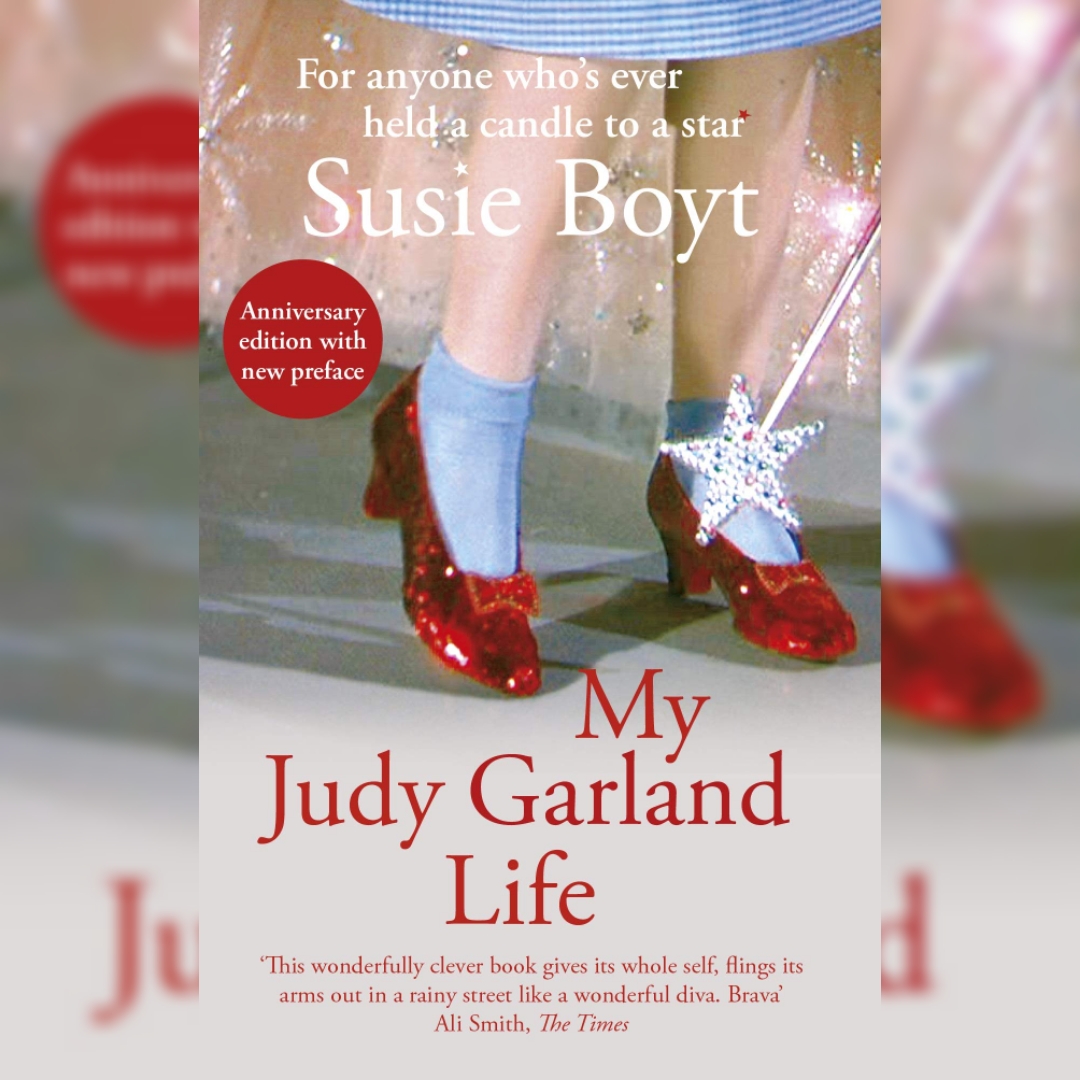 August 2019 is the 80th anniversary of The Wizard of Oz

An irresistible mixture of memoir, biography, cultural analysis, experiment and hero-worship about one person’s enduring fascination. This is for anyone who has ever nursed an obsession or held a candle to a star.

Judy Garland has been an important figure in Susie Boyt’s world since she was three years old: comforting, inspiring and, at times, disturbing her. In this unique book Boyt travels into the deep underworld of hero-worship, reviewing through the prism of Judy our understanding of rescue, consolation, love, grief and fame.

Layering key episodes from Garland’s life with defining moments from her own, Boyt demands with insight and humour, what it means, exactly, to adore someone you don’t know. Need hero worship be a pursuit that’s low in status, or can it be performed with pride and style? Are there similarities that lie at the heart of all fans? And what is the proper husbandry of a twenty first century obsession. Anyway?

‘When Judy sang to me as I grew older she seemed to confirm the things that I’d all my life held to be true.’

Hands up if you’ve ever obsessed over a celebrity? I imagine pretty much everyone reading this raised their hands just then. I know I did. While I’m no stranger to hero-worship, I did think reading this book that the author takes it to a whole other level. I’m a big fan of Mariah Carey and parts of this book reminded me of some lambs (Mariah’s name for her fans) I know who, while I understand their love and obsession, seem to me to never have left that peak of obsession we reach in our teenage years.

Susie Boyt opens her book talking about her love for Judy Garland and how it helped her when she was a shy, sensitive child. I can relate to that. I’ve always been someone who feels things deeply and like Susie I fell in love with The Wizard of Oz at just three years old. I was instantly obsessed with the film and knew it back to front and inside out. I would quote lines, watch it repeatedly and put on skits acting out scenes with my friends. Of course, I was always Dorothy. But unlike Susie it was the movie and Dorothy I fell in love with, not the actress herself, though I’ve always been a fan from a distance. I can also relate to music and words from someone you admire helping you through hard times. Bad break up – I’d put on Someday by Mariah Carey. A day I’m feeling low – I’d put on Through The Rain. I could probably name a Mariah song for every emotion and situation so I definitely get using that to help you or just to make your day brighter. I’m not going to pull her apart and critique how she hero-worships in detail, and I think there was a lot of positives she has gleaned from her love of Judy, but there were times I thought she seemed a little crazy and I worried about her.

I loved learning more about Judy, including the difficult parts, and she is more interesting to me than ever before. I’ve always been in awe of her talent and admired everything she achieved despite the many obstacles in her way, some of which she arguably put in front of herself. She was a star through and through. But she was also neurotic and insecure. I always saw a sadness to her, like you could tell this was all a bit much for her. All she  wanted to be loved without condition other people taking from her and isn’t that what everyone wants after all? The tragedy is she never found it and died while estranged from her family and alone in a bathroom from an accidental drug overdose. That is no way for anyone’s life to end. I did like that her happiness and joy in life is emphasised as much as her difficulties aren’t shied away from. No one is one dimensional. They aren’t happy or sad, good or bad, they are a bit of everything and that changes all the time. This book showed me more of the real person behind the persona and it made me fall in love with her a little more.

But this book didn’t only teach me things about Miss Garland. It also gave great insight into how some fans think and can be affected by an obsession. The author is aware of how far she goes for her idol and often argues the virtues and benefits of such obsession, which I found fascinating. She asks why we’d want to give up the intense, teenage-like obsession when we get such a rush from it. The book contains a lot of psycho-analysis, which is understandable given her family history. All the way through the book it is clear that the author sees her life as having been enhanced by her love for Judy, rather than hindered by it. Though I have to wonder if there are times those around her wouldn’t necessarily agree.

An intriguing book that at times felt a little messy and strange, My Life With Judy Garland is honestly like nothing I’ve ever read before. And it is a book I won’t forget.

Thank you to Virago books and Ann Cater at Compulsive Reader Blog Tours for my copy of this novel.

Susie Boyt was born in London and educated at Camden School for Girls and Oxford University. After a nerve-wracking stint at a lingerie boutique and an alarming spell working in PR for Red Stripe lager and the Brixton Academy, she settled down into writing and is the author of six acclaimed novels including The Last Hope of Girls, which was short-listed for the John Llewellyn Rhys Prize, and Only Human, which was short-lsited for the Mind Award. Of her last novel, Love & Fame, The Sunday Times said ‘she writes with such precision and wisdom about the human heart under duress that the novel is hard to resist.’

Susie wrote a much-loved weekly column about life and art for The Financial Times Weekend for fourteen years and still contributes regularly to their books and fashion pages. Last Year she edited The Turn of the Screw and Other Ghost Stories for Penguin Classics. She is also a director at the Hempstead theatre in London and works part time for Cruse Bereavement Care.

She lives in London with her husband and two daughters. She is the daughter of the painter Lucian Freud and the great-grand-daughter of the father of psychoanalysis, Sigmund Freud.

One thought on “Blog Tour Review: My Judy Garland Life by Susie Boyt ⭐⭐⭐.5 ”