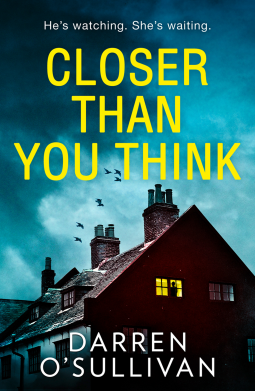 Having barely escaped the clutches of a serial killer, Claire Moore has struggled to rebuild her life. After her terrifying encounter with the man the media dubbed The Black-Out Killer, she became an overnight celebrity: a symbol of hope and survival in the face of pure evil. And then the killings stopped.

Now ten years have passed and Claire remains traumatised by her brush with death. Though she has a loving and supportive family around her, what happened that night continues to haunt her still.

Just when things are starting to improve, there’s a power cut, a house fire, another victim found killed in the same way as before.

The Black-Out Killer is back. And he’s coming for Claire.

Thank you to Netgalley, HQ Digital and Darren O’Sullivan for the chance to read and review this book.

“The one who lived”. That’s what the media called her. But Claire Moore doesn’t feel like she’s living. It’s been a decade since she survived the night that she was supposed to become the victim of a serial killer. A night that killed her husband. Still struggling with the guilt of not dying too, afraid to be in the bathroom alone, plagued by nightmares of that night and a fear of someone coming for her once again, Claire is a virtual prisoner. On the rare occasions she leaves her house she is terrified of every noise she hears and person she sees. But she wants to live again so in an attempt to lay her ghosts to rest she heads back to the place her life was destroyed and to visit her husband’s grave for the first time since his death. Not only that but on the advice of her mother she starts a slow building relationship with a man named Paul who is patient and understanding of her trauma. Maybe she can finally enjoy life again. If only she could shake the paranoia she’s being watched…

But what Claire doesn’t know is she isn’t paranoid, there is someone watching her. The same man who tried to kill her ten years ago is watching and he doesn’t like what he sees. She’s forgetting him and the lesson he taught her. He writes her chilling letters but never posts them, waiting for the right time for her to read them. The letters detail his obsession, his disappointment, his promises that they will meet again soon and that this time she won’t get away. But first he has to make her remember him. What better way than by killing again in the exact same way he did before; striking fear not only in Claire, but the general public once again.

This book was narrated by both Claire and the elusive killer, who’s name we don’t know for almost all the book. I think having the killer narrating as well as including the letters he was writing helped the tension of the book. When the book starts the world thinks The Black-Out Killer is dead so without the chapters from the killer it would seem like Claire, who is constantly on edge and frightened of every little thing, was being paranoid and it would have been easy to get sick of her character, despite the empathy I felt for what she’d been through. But as we knew he was still alive and plotting her demise once more, there was apprehension every time Claire left the house, or thought she was being watched or heard a suspicious noise in the house and I felt like telling her to be even more cautious many times as we knew she was right to be worried, but just not in the way she knew of.

I did like both of the main characters and, yes, I’m aware it’s a little strange to like a serial killer, but I liked that he was intelligent and had clear motivations for what he did, albeit very twisted and misguided ones. His obsession with Claire seemed to be something he couldn’t shake, a weakness as it were. The conflicting duality of his personality: a killer who delighted in his task, and relished the pain and terror he inflicted, bu then also held himself to a strict reason for each victim being chosen and vetting process, rather than simply killing for fun, was captivating. Claire was also a great character. Her agoraphobia, unhealthy coping mechanisms and fear of trust were understandable of someone who had gone through what she did. The reason it could have become annoying is very often she was overreacting to things but when you know she’s in mortal danger and is actually being watched by the killer you are glad she isn’t blase about things. The thing I loved most about how Claire was written was the fantastic description of her anxiety and panic attacks. I too suffer from them and after reading this book I will forever see them as “icy fingers playing” or “the icy hand that rested in my chest.” I’ve never read such a vivid and accurate description of how it feels.

I liked that I was never quite sure if my suspicions of certain characters were correct while reading this book. There were people who rang alarm bells but I always had this nagging doubt that this could be “him”. However absolutely nothing could have prepared me for the big reveal and I was in awe at the final twist the story took before leaving me to rethink everything I had just read. A brilliant thriller from an author I will certainly be reading again.