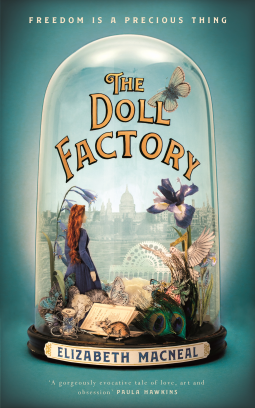 Thank you to Picador Books, NetGalley and Elizabeth Macneal for the chance to read and review this novel.

“Picador’s most spectacular debut for 2019”

The Doll Factory, the debut novel by Elizabeth Macneal, is an intoxicating story of art, obsession and possession.

London. 1850. The Great Exhibition is being erected in Hyde Park and among the crowd watching the spectacle two people meet. For Iris, an aspiring artist, it is an encounter of a moment – forgotten seconds later, but for Silas, a collector entranced by the strange and beautiful, that meeting marks a new beginning.

When Iris is asked to model for a Pre-Raphaelite artist Louis Frost, she agrees on the condition that he will also teach her to paint.  Suddenly her world begins to expand, to become a place of art and love. But Silas has only thought of one thing since their meeting, and his obsession is darkening……

This magnificent debut novel is set in the world of Pre-Raphaelite art in Victorian London. It hosts a variety of characters: twin sisters who make dolls for their overbearing mistress, a lonely taxidermist with a sinister side, a loveable street urchin, painters, prostitutes and more. This cast that often seem to have nothing in common are all connected by their struggle to survive and find meaning and magic in the everyday aspects of life.

We start with a mysterious girl who spends her nights secretly painting by candlelight, trying not to wake her sister or mistress.  We later learn this girl is Iris, who works at the Doll Factory painting the porcelain heads and limbs of the custom-made orders, while her twin sister, Rose, sews the details onto their clothing. They work 12 to 20 hours a day with little rest and Iris dreams is escaping her life and painting like a true artist.

Our other main character is Silas, who owns Silas Reed’s Shop of Curiosities Antique and New. He is fascinated by the deformed beauty in the world and makes up histories for the animals he works on. Silas is a proud man who knows he’s destined for greatness and deserves greater respect than he is afforded. A lonely man, he daydreams of his lost love, a girl named Flick, who disappeared when the pair were teenagers and left him heartbroken.

Iris and Silas meet when introduced by Albie, a lovable street urchin who collects and sells dead animals to Silas and also sews skirts and dresses for the dolls made at the factory.  While Iris instantly forgets the encounter, Silas is immediately smitten and is sure that she feels the same. He is so taken with her that when one of the painters who buy his animals to capture in their paintings complains he is unable to finish his latest creation as he no longer has a model, Silas suggests Iris. Louis then approaches her to offer the position and after some negotiations she leaves behind her sister and The Doll Factory to become his model and learn how to paint.

While Iris is enjoying her new freedom and all the opportunities now open to her, Silas is brooding. He has convinced himself that Iris is in love with him too but as moments of reality seep in and he feels rejected by her, we see a worrisome darkness creep in. It seems he will go to any lengths to be with her and make her love him.  Albie sees his obsession and becomes increasingly worried for Iris. He tries to warn Louis but his concerns are dismissed as Silas is seen as a joke, weird but harmless. Will this nonchalance be Iris’s undoing or will Silas be stopped before he can carry out his plan?

I was mesmerised by the beautiful cover of this book from the moment I saw it. When I read the synopsis I knew it was a book I needed to read.  I was right. The author has written a captivating piece of historical fiction with characters you will love and loathe, bringing the world they inhabit to life vividly with intricate details of the time period in which it’s set. I would highly recommend this book and can’t wait to read more from this promising and talented new author.