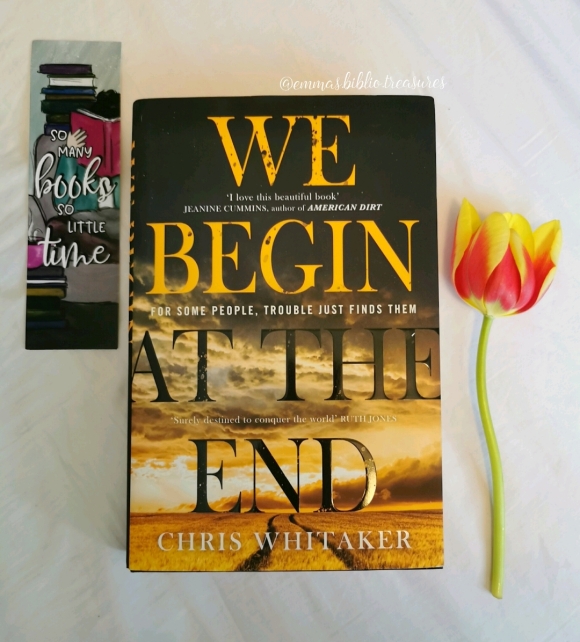 Welcome to my stop on the blog tour. Thank you Tracy at Compulsive Readers for the invitation to take part and Zaffre Books for my gifted copy.

For some people, trouble just finds them.

Now, he’s been released from prison and is back in his hometown of Cape Haven, California. Not everyone is pleased to see him. Like Star Radley, his ex-girlfriend, and sister of the girl he killed.

Duchess Radley, Star’s thirteen-year-old daughter, is part-carer, part-protector to her younger brother, Robin – and to her deeply troubled mother. But in trying to protect Star, Duchess inadvertently sets off a chain of events that will have tragic consequences not only for her family, but also the whole town.

How far can we run from the past when the past seems doomed to repeat itself?

“None of us are any one thing. We’re just a collection of the best and worst things we’ve done.”

We Begin at the End is a dark and stormy tale about how far some will go for those they love. Powerful, affecting and full of twists and turns, this is a story about tragedy, guilt, love, loss, justice and revenge, exploring the concepts of good and evil and how we are all made up of the gray area in between.

When seven-year-old Sissy Radley is killed by fifteen-year-old Vincent King, the small town of Cape Haven, California is rocked to its core. His release thirty years later sparks a devastating chain of events that will shake them all over again.

Exquisitely written, I immediately fell in love with the elegant, lyrical prose that gives this book a distinct and captivating ambience. The complex and layered plot is hard to predict and had my head swimming with questions and theories from the start, with one particular theory that whispered in my ear throughout.  It is a subdued novel and I admit that I found it slow in places. But in the latter half of the book the tension rises as the author expertly weaves together the many tangled webs in ways I never expected.

“I am the outlaw Duchess Day Radley.”

The author created a community and characters that were richly drawn, gritty, flawed and fragmented. The shining star of these is Duchess, a thirteen-year-old girl who I fell in love with. Duchess is  spiky, straight-talking, foul-mouthed, feisty, jaded and hard as nails. But she is also a vulnerable child, desperately loved and forced to grow up too soon. She has been taking care of her little brother Robin for years and is furiously protective of him, with everything she does – the good and the bad – is for him. It was impossible not to be affected by the two of them as life cruelly knocked them down again and again and they are characters I won’t soon forget.

We Begin at the End is a thriller with depth; a poignant, weaving tale laced with tragedy and forlorn hope. It is perfect for those looking for an intelligent thriller or those who don’t enjoy the gore that often features in this genre.

Chris Whitaker was born in London and spent ten years working as a financial trader in the city. He now lives in Hertfordshire with his wife and two young sons. His debut novel, Tall Oaks, won the CWA John Creasey New Blood Dagger. Chris’s second novel, All The Wicked Girls, was published in August 2017.

One reply on “We Begin at the End by Chris Whitaker ⭐⭐⭐⭐”