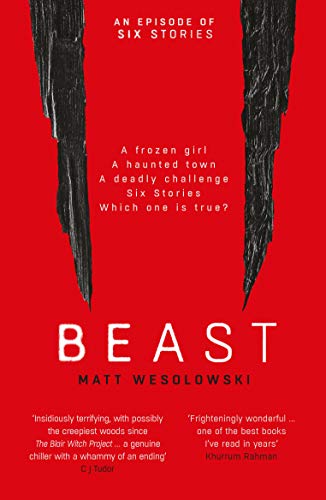 Welcome to my spot on the blog tour for this dark and thrilling book. Thank you to Anne at Random Things Tours for the invitation to take part and to Karen at Orenda for the eBook ARC.

Elusive online journalist Scott King examines the chilling case of a young vlogger found frozen to death in the legendary local ‘vampire tower’, in another explosive episode of Six Stories…

In the wake of the ‘Beast from the East’ cold snap that ravaged the UK in 2018, a grisly discovery was made in a ruin on the Northumbrian coast. Twenty-four-year-old vlogger, Elizabeth Barton, had been barricaded inside what locals refer to as ‘The Vampire Tower’, where she was later found frozen to death.

Three young men, part of an alleged ‘cult’, were convicted of this terrible crime, which they described as a ‘prank gone wrong’. However, in the small town of Ergarth, questions have been raised about the nature of Elizabeth Barton’s death and whether the convicted youths were even responsible.

Elusive online journalist Scott King speaks to six witnesses – people who knew both the victim and the three killers – to peer beneath the surface of the case. He uncovers whispers of a shocking online craze that held the young of Ergarth in its thrall and drove them to escalate a series of pranks in the name of internet fame. He hears of an abattoir on the edge of town, which held more than simple slaughter behind its walls, the tragic and chilling legend of the ‘Ergarth Vampire’….

Both a compulsive, taut and terrifying thriller, and a bleak and distressing look at modern society’s desperation for attention, Beast will unveil darkness from which you may never return…

Beast is a chilling, captivating and suspenseful story told by an original voice in a fresh and creative way. It is a story of the search for the truth of a young girl’s brutal murder that lies hidden behind the differing perspectives of those who knew her. It is an exploration of internet culture, the obsession with becoming internet famous and what motivates three young men to murder a popular young woman without apparent reason.

Elizabeth Barton was a YouTube star on the rise and the darling of Ergarth, a bleak, rundown town on the Northumrian coast. Her brutal murder left the town stunned. But could there be more to Elizabeth and her death that has been reported? In his podcast, Six Stories, online journalist Scott King attempts to find the answer to this and other questions surrounding the crime by talking to those who knew those involved best of all.

I loved the podcast format of this book. It’s the first time I’ve read anything like it and as a true crime buff it is exactly the kind of thing I listen to. I loved how realistic it felt, like I was actually listening to the interviews and commentary. The different perspectives provided a unique and fascinating look at the crime and the effects on those left behind, as well as helping to slowly reveal the pieces of the puzzle King was trying to solve. Wesolowski’s writing was absorbing, atmospheric and descriptive; demanding your attention and pulling you in. The eerie legend of the Vampire Tower and the Ergarth Vampire permeate the pages and provide an air of spine-tingling unease.

We only get a first person glimpse of Elizabeth in the YouTube videos she posted leading up to her death. It’s clear she’s  on in these videos; being the person she wants the world to see. But is it the real her? Everyone in town loved Elizabeth. She was popular, kind and known for her philanthropy. Girl wanted to be her, and boys wanted to be with her. But as he digs deeper King learns there is another story, things she made sure was hidden from the world that didn’t fit the image she was trying to maintain. But we aren’t sure which is real and the more we learn the more the mystery deepens. I liked that Scott was so elusive in this book. Though he’s there throughout we don’t know a lot about him and I found that helped me focus on the story he was trying to tell. The book does hint at things about him being revealed in a previous book, but it’s a passing comment here or there and didn’t affect my enjoyment or understanding of the story. It just made me even more eager to read the other books in the series.

The Six Stories series is one I’ve been meaning to read for a while after seeing a lot of praise for it online and I’m glad I’ve finally read a book by this marvelous author. Spectacularly written, chilling, cryptic, ominous and unpredictable, this is a book that will stay with you for all the right reasons.

Matt Wesolowski is an author from Newcastle-Upon-Tyne in the UK. He is an English tutor for young people in care. Matt started his writing career in horror, and his short horror fiction has been published in numerous UK and US based anthologies such as Midnight Movie Creature, Selfies from the End of the World, Cold Iron and many more. His novella, The Black Land, a horror set on the Northumberland coast, was published in 2013. Matt was a winner of the Pitch Perfect competition at Bloody Scotland Crime Writing Festival in 2015. His debut thriller, Six Stories, was an Amazon bestseller in the USA, Canada, the UK and Australia, and a WHSmith Fresh Talent pick, and film rights were sold to a major Hollywood studio. A prequel, Hydra, was published in 2018 and became an international bestseller. Changeling, book three in the series, was published in 2019 and was longlisted for the Theakston’s Old Peculiar Crime Novel of the Year and shortlisted for Capital Crime’s Amazon Publishing Reader Awards in two categories: Best Thriller and Best Independent Voice. 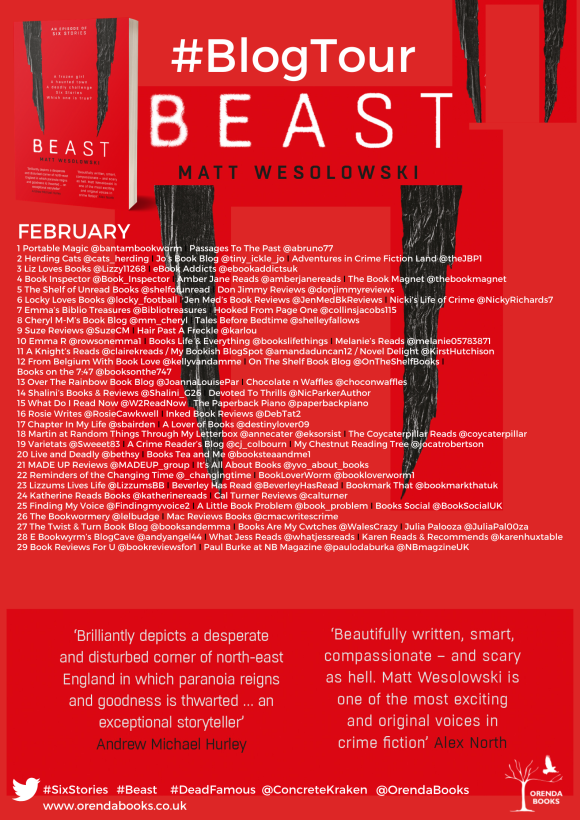 Huge thanks for the blog tour support Emma x

[…] no secret how much I love Orenda books and Matt Wesolowski become an instant must-read when I read Beast, the last installment in this series. I’ve been counting down to the next one ever since. […]