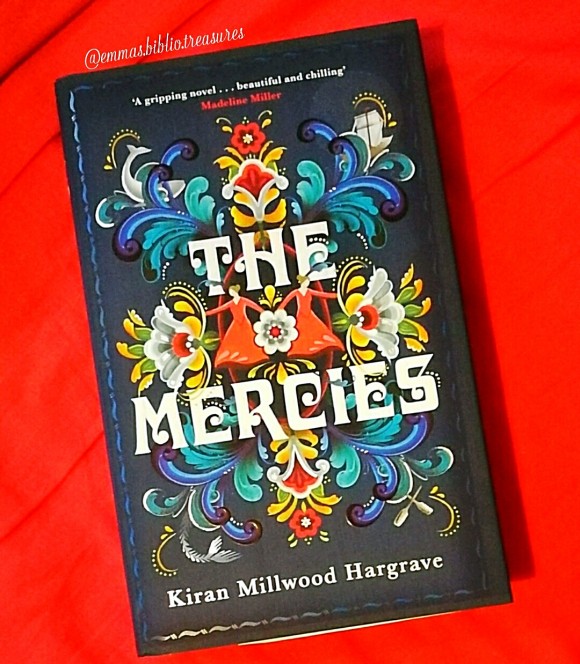 Inspired by the real events of the Vardø storm of 1617, The Mercies is a story about how suspicion can twist its way through a community, and a love that may prove as dangerous as it is powerful.

On Christmas Eve 1617, the sea around the remote Norwegian Island of Vardø is thrown into a reckless storm. As Maren Magnussdatter watches, forty fishermen, including her father and brother, are lost to the waves – the menfolk of Vardø wiped out in an instant.

Vardø is now a place of women.

Eighteen months later, a sinister figure arrives. Summoned from Scotland to take control of a place at the edge of the civilised world, Absolom Cornet knows what he needs to do to bring the women of Vardø to heel. With him travels his young wife, Ursa. In Vardø, and in Maren, Ursa finds something she has never seen before: independent women. But Absolom sees only a place flooded with a terrible evil,one he must root out at all costs. 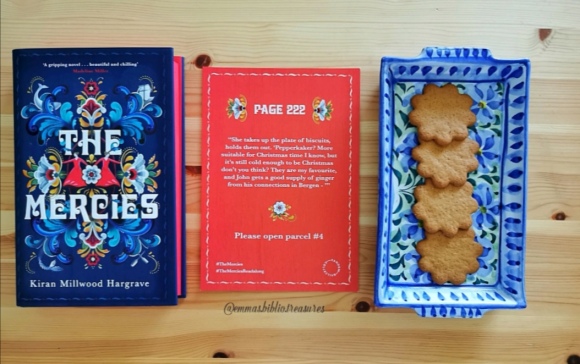 Breathtakingly beautiful, mesmerising, lingering and consuming, I drank in this astonishing novel quickly and fell in love.

Inspired by real events, the story begins on Christmas Eve 1617 when a terrible storm hits the remote island of Vardø and kills the forty men at sea, leaving the island now one of mostly women. Slowly they learn to survive without them, taking on roles usually for men in a bid to survive. A year later, just as things feel like they’ve settled, the island is disrupted again by the arrival of a new commissioner from Scotland. The women are wary, unsure what this means for them, and soon they find themselves caught up in the witch trials of the era, with neighbour turning against neighbour as they face a new battle for survival.

It’s taken a while to be able to get my thoughts about this book down in a review I felt would do it justice and in that time I haven’t been able to stop thinking about it. I first heard about this book last year when author Elizabeth Macneal raved about it on her page and I immediately knew I needed to read it. I read this book as part of a readalong with the Tandem Collective. It was my first readalong with them. It made it a much more immersive and sensory experience and increased my already high excitement for the book.

It is a story about sisterhood, a matriarchal society that is still beholden to the rule of men. It is a story about love, relationships, bravery, power and betrayal; about witchcraft, folklore and faith. At the centre is the story of a friendship of two women just trying to survive in a harsh and terrifying time.

It is told through the eyes of two women from very different backgrounds: Maren was raised in Vardø and knows nothing but the bleak, harsh landscape and the drudgery of life in the far north. Ursa was raised in the city and the new bride is shocked at the barren, hard circumstances she must now live in and struggles to adjust. The two form a quick and unexpected bond, becoming eachother’s confidant and balm.  I liked both narrators and their different voices. They were both kind, sympathetic characters and had strengths they didn’t recognise in themselves. For Ursa the culture shock of life Vardø, her dismay at finding herself married to a man who shows little affection or attention to her and missing her family, combines into a deep depression she can’t pull herself out of. Maren becomes a beacon of light pulling her from the dark as they bond when Maren teaches her how to keep house. Maren is used to the realities of life in Vardø but finds herself ashamed of how she lives and shocked at Ursa’s innocence and incapability. Ursa is a beautiful being and she feels honoured to have been asked to teach her. She is her escape, just as Maren is hers. I enjoyed their friendship and how Ursa in particular fought for it when others didn’t approve, saying Maren wasn’t good enough.

Every story needs a villain and the biggest villain in this story was Absolom, Ursa’s husband. He was a vile, cruel man who uses his religion to justify his actions. We know early on that he’s there to root out the evil that is believed to reside in Vardø but Ursa knows nothing of this or his past. When she learns the truth she is horrified and afraid. He had no redeeming qualities and got more repugnant as the story went on and I was terrified of what would become of both women as they skated on the edge of what is considered acceptable in their society.

The writing in this book is simply beautiful. With lyrical and elegant prose that tells the story fluently, this is an example of storytelling at its finest. It is my first time reading a book by this author but I do have one of her others on my shelf and am even more impatient to read it now.

The Mercies is an exquisite, powerful and enchanting read that seeped right into my soul. It is as stunning inside as it is on the outside and I’ve no doubt it will be one of my favourite books this year. READ THIS BOOK. 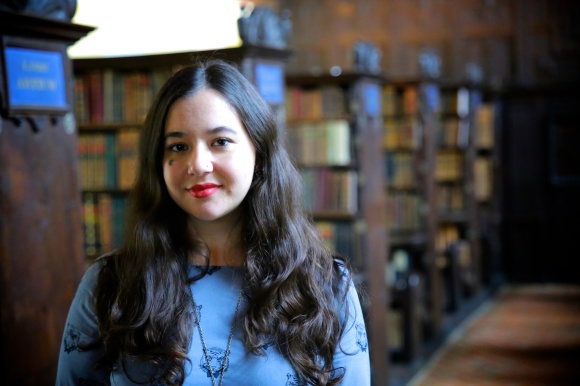 Kiran Millwood Hargrave (b. Surrey 1990) is a poet, playwright, and author. Her books for children and young adults include the bestselling The Girl of Ink & Stars, The Way Past Winter, and The Deathless Girls. Her debut novel for adults is The Mercies (February 2020).

The Mercies has been selected for the BBC Radio 2 Book Club, and was called ‘unquestionably the book of the 2018 London Book Fair’ by The Bookseller.

Kiran lives in Oxford with her husband, the artist Tom de Freston, and their rescue cat, Luna.

One reply on “The Mercies by Kiran Millwood Hargrave ⭐⭐⭐⭐⭐”