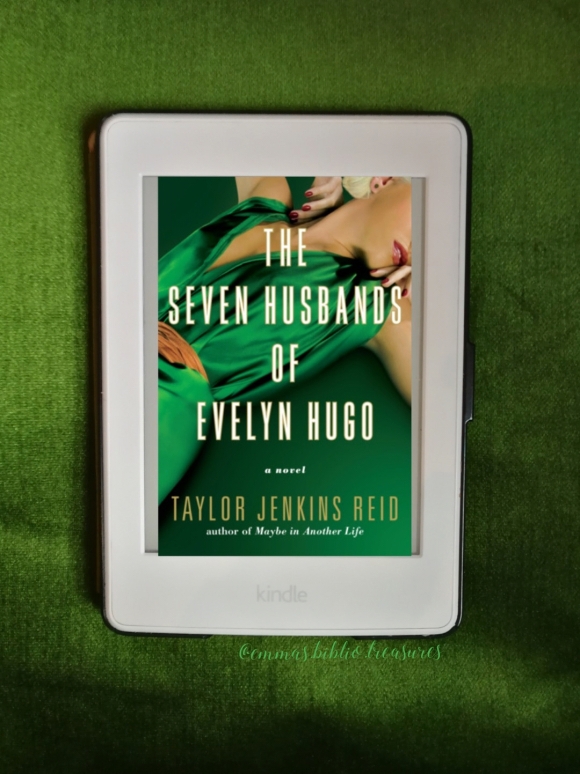 Aging and reclusive Hollywood movie icon Evelyn Hugo is finally ready to tell the truth about her glamorous and scandalous life. But when she chooses magazine reporter Monique Grant for the job, no one is more astounded than Monique herself. Why her? Why now?

Monique is not exactly on top of the world. Her husband has left her, and her professional life is going nowhere. Regardless of why Evelyn has selected her to write her biography, Monique is determined to use this opportunity to jumpstart her career.

Summoned to Evelyn’s luxurious apartment, Monique listens in fascination as the actress tells her story. From making her way to Los Angeles in the 1950s to her decision to leave show business in ‘80s, and of course, the seven husbands along the way, Evelyn unspools a tale of ruthless ambition, unexpected friendship, and a great, forbidden love. Monique begins to feel a very real connection to the legendary star, but as Evelyn’s story nears its conclusion, it becomes clear that her life intersects with Monique’s own in tragic and irreversible ways.

Written with Reid’s signature talent for creating “complex, likeable characters” (Real Simple), this is a mesmerising journey through the splendor of old Hollywood into the harsh realities of the present day as two women struggle with what it means – and costs – to face the truth.

“I had come to Hollywood to do one thing, and I was going to do it.”

79 year old Evelyn Hugo has lived a glamorous life. The Hollywood legend is as famed for her seven husbands as her movie career. After years of silence she’s finally ready to reveal all and appoints journalist Monique Grant as the person she wants to tell the truth about her life to the world.

As she tells her fascinating and salacious story, Monique can’t help but wonder why she was chosen for this job and what Evelyn means when she says it will become clear. As Evelyn tells her tale, Monique slowly learns there is more to the reclusive, glamorous and enigmatic Evelyn than people know and listens as her own life is changed forever by the shocking revelations she unveils.

This book is a masterpiece. I fell in love with everything about it – the evocative writing, the detailed characters and the immersive story. It’s just breathtaking. I’ve obviously heard of Taylor Jenkins Reid as she’s hugely popular in the book community, but this was my first time reading anything she’s written. I am now a fan. With this one book I know I want to read everything she has and will write (Daisy Jones is next on my list).

I also fell in love with Evelyn. She’s sharp, witty, ambitious, calculated and larger than life. Listening to her tell the full truth of that life for the first time was like a roller-coaster of all your emotions. Everyone thinks they know her story but the truth is far more dramatic, beautiful and devastating than any movie she’s played a role in.

“I never felt I had much choice in the matter. Being wanted meant having to satisfy. At least, that was my view of it back then.”

Moving to Hollywood was what Evelyn saw as her ticket out of living Hell’s Kitchen with her abusive father. But little did she know that she wasn’t really escaping, just trading a downtrodden existence where she is used and abused for a glamorous one filled with the same things. The book talks about the things now being highlighted by the #MeToo movement such as sexual favours in exchange for better roles, and talks about how she was turned into a star version of herself by stylists, given elocution lessons and told how to answer questions in interviews. It wasn’t about who she really was but who they wanted her to be for the public. And that included who she was supposedly in a relationship with. The press pieces that are included sporadically give a fascinating insight into how the media portrays things versus the reality and the difference between a public persona and who someone really is.

As the title suggests Evelyn has been married seven times. Sometimes it was for convenience, other times for love. And at the heart of this novel is a beautiful love story that’s very real; it involves ups and downs, fights and an overwhelming love for each other that outlasts every other love in their lives. It’s the kind of love you dream of and for Evelyn it came with added complexities such as the expectation to be with a certain person by the studio, rather than to actually follow her heart. I read the book hoping she would have a happy ending with her true love after all she’d been through in life. I’m not going to spoil it and say if it happens.

The Seven Husbands of Evelyn Hugo is a mesmerising and spectacular novel that I couldn’t put down, devouring it within a day. The story and its title character are both unforgettable and will stay with you long after reading.