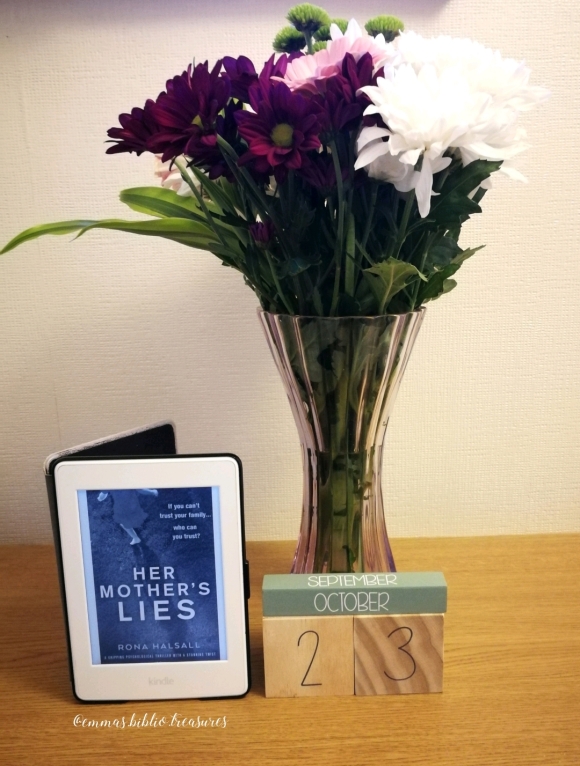 Welcome to my stop on the blog tour for this tense and gripping thriller. Thank you to Bookoture for my invitation to take part, and to Bookoture and NetGalley for my e-ARC of the novel in exchange for my honest review.

‘She hasn’t told you, has she?’ He squeezed his eyes shut. She watched the muscles of his jaw tense, then his eyes blinked open and he took a deep breath…‘I’m not your father.’

He was there for her first steps, for her first day of school. He helped her with her homework, and took her for ice cream at the weekends. And then, two days before her ninth birthday, Martha’s father walked out. She never knew what went wrong, but she and her mother Fran never saw or heard from him again.

Fifteen years later, frustrated in a life which consists of caring for an increasingly-ill Fran, and heartbroken after the death of a beloved friend, Martha decides she needs some answers, and she knows it’s time to track down the father who left them behind.

Except when she comes face-to-face with him for the first time in fifteen years, he tells her a brutal truth.

He isn’t her father.

Her mother has been telling lies.

And not just about who her real father is.

I flew through this taut and twisty thriller. It had me hooked from the first page right until the last, immersing me in Martha’s world as she saw everything she believed to be true crumble and following her in her search for the truth.

Martha and her mother Fran have a difficult relationship. Martha loves her but the twenty-four-year-old craves freedom and resents Fran’s reluctance to untie the apron strings, as well as her financial and practical reliance due to her self-inflicted declining health. She’s torn between following her dreams and enjoying her youth, and being there to help the one person that’s always been there for her. But when Fran is rushed into hospital after a drinking binge triggers a diabetic coma, Martha uncovers a series of lies that shatter her whole world. Turning to the only person she can think of, her friend Izzy, Martha vows to unveil the truths she’s been denied all these years, having no idea that she’s setting down a path that will see her entire life unravel.

I was not prepared for this book. Nothing is as it seems. The author skillfully crafted a deceptive hall of mirrors, luring me into believing I had it all figured out. I didn’t see the bombshell coming until it was on the page. Bravo Rona, Bravo! I was now transfixed and on the edge of my seat, unable to look up until I finished the book.

Her Mother’s Name is layered, complex, emotionally charged, skillfully plotted and sizzling with suspense. I would highly recommend it to anyone who enjoys psychological thrillers.

Rona is the author of Best Selling psychological thrillers THE HONEYMOON, LOVE YOU GONE and KEEP YOU SAFE. Her fourth book, HER MOTHER’S LIES is out in October 2019.

She lives on the Isle of Man with her husband, two dogs and three guinea pigs. She is an outdoorsy person and loves stomping up a mountain, walking the coastal paths and exploring the wonderful glens and beaches on the Island while she’s plotting how to kill off her next victim. She has three children and two step-children who are now grown up and leading varied and interesting lives, which provides plenty of ideas for new stories!