Today is my stop on the blog tour for this gripping psychological thriller.

Returning early from a disastrous date night with my husband, I know something is wrong the moment the wheels crunch the gravel of our home. Inside, the TV is on and a half-eaten meal waits on the table. My heart stops when I find out little girl alone in the house and our babysitter, Sasha, is missing…

Days later, when I’m arrested for Sasha’s murder and torn away from my perfect little family, I’ll wish I had told someone about the threatening note I received that morning.

I’ll hate myself for not finding out who the gift hidden inside my husband’s wardrobe was for.

I’ll scream from the rooftops that I’m innocent – but no one will listen.

But will you believe me?

Twisted and absolutely unputdownable, Date Night exposes what goes on behind the closed doors of a happy home and the dangerous truths we ignore to protect the ones we love. Perfect reading for anyone totally gripped by The Wife Between Us, Friend Request or Gone Girl. 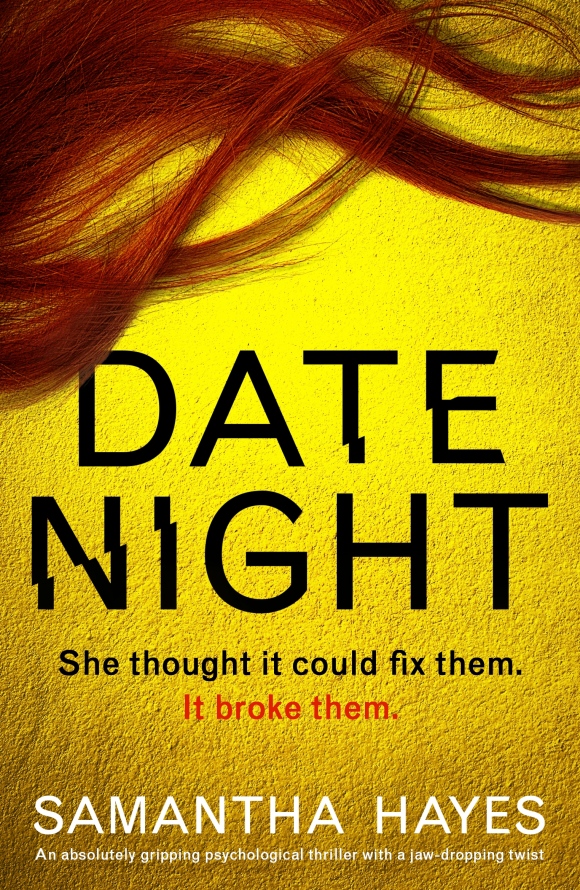 Never in a million years did I see the way this fast paced, taut and twisty whodunit would unfold or its shocking conclusion.

It starts with a note on Libby Randell’s car one icy autumn morning, telling her that her husband Sean is having an affair. She doesn’t want to believe it and tries to put it out of her mind as a malicious note or a sick prank, but she can’t shake the unease and suspicion that’s been unearthed. After weeks of denials, arguments and mistrust the couple decide to have date night as a way to get back on track. But it’s a disaster and after having the same old argument the pair arrive home early finding the TV on and their babysitter, Sasha, missing. Sasha is dependable, she’s Libby’s employee and friend as well as their babysitter, and Libby knows she wouldn’t just up and leave their daughter Alice alone and all her things behind. Something is terribly wrong…

Libby is a mess. She can’t think straight, can’t work and can’t stop worrying about Sasha. She’s also still convinced that Sean is having an affair. Sean tells her she has to get back to normality, not to worry and to trust him like she’s always done and it will be ok. But then Libby is arrested for Sasha’s murder. She vehemently denies any knowledge of her death or whereabouts but the police seem convinced she’s holding something back. Is Libby hiding something? Could Sean be hiding more than another woman? Or could someone else be to blame?

This addictive mystery kept me guessing from the first page until the last. I could never decide what I thought had happened to Sasha, who was to blame or if I thought Libby or Sean were involved. I had a number of theories and not one of them came close to any of the bombshells the author dropped.

The story is told in dual timelines, both of which are narrated by Libby. Libby was an unreliable narrator and I often felt like she was leaving things out, though I didn’t think it was deliberate some of the time. These things, alongside opening with her arrest, meant I was never quite sure if I could trust her despite her proclamations of innocence. She is a woman who has everything she’s ever wanted and her world is rocked when she receives the note about Sean. After that she becomes almost obsessed with the idea that he’s cheating, and most of his responses to her are far from helpful or reassuring. I found her easy to empathise with and relate to, particularly as the true nature of Sean’s character became clearer.

I hated Sean. From the start he seemed unconcerned with allaying Libby’s fears and instead is angry in a way that seems over the top and that’s used to divert from actually talking about the issues.Though initially you don’t imagine it, he does become a great villain as over time his abusive personality and the way he gaslights Libby becomes more apparent. I won’t say more about it as it would mean giving away spoilers, but I will say that I was definitely rooting the Libby to leave him or for him to be guilty and sent to jail.

One of the best parts about this book was the quality of the writing. Her vivid and imaginative descriptions brought the scenery to life and made me feel like I was seeing and feeling what Libby did. The author created a tense atmosphere full of mystery that made me want to not put this book down. Even when I was near the end I still couldn’t decide what the outcome would be, which is something I love in a book.

Date Night is a fantastic, tense thriller full of twists and turns and with a jaw-dropping finale that left me reeling. The more I read of Samantha Hayes work, the more I love her and she is definitely a must-read author for me now. I highly recommend this book to anyone who enjoys this genre.

Thank you to NetGalley, Bookoture and Samantha Hayes for the chance to read this novel in exchange for my honest review and to Noelle Holten for my invitation to take part in the blog tour.

Samantha Hayes grew up in Warwickshire, left school at sixteen, avoided university and took jobs ranging from private detective to barmaid to fruit picker and factory worker. She lived on a kibbutz, and spent time living in Australia and the USA, before finally becoming a crime-writer.

Her writing career began when she won a short story competition in 2003. Her novels are family-based psychological thrillers, with the emphasis being on ‘real life fiction’. She focuses on current issues and sets out to make her readers ask, ‘What if this happened to me or my family?’

Don’t know why I never heard of Samantha Hayes! Looks like you had a great time. Looking forward to seeing you on more trips with him.