Today is my stop on the blog tour for this emotional novel. Thank you to NetGalley, Bookoture and Emma Robinson for the chance to read this novel in exchange for an honest review.

Your daughter will not speak…But can she teach you how to live?

Ever since Ruby was tiny, she has been unique. Her smiles are magically rare, and she likes things done in a very particular way – her blocks are always colour-coded and her toy animals stand in regimented lines. She is also the daughter of Sara’s dreams – even on days when being a mother to a three-year-old is exhausting.

Not everyone understands Ruby like Sara does though. Not Sara’s husband Mike, and certainly not her disapproving mother-in-law, Barbara. So when circumstances force their family to move in with Barbara, Sara knows it’s going to make motherhood even harder.

Then Ruby’s pre-school suggests that her behaviour and refusal to speak might be the first signs of a bigger issue, in the same week that Mike walks out on them. And Sara’s world is blown apart.

Facing life as a single parent and trying to work out Ruby’s needs is more than Sara can face alone. There’s only one person she can turn to for help – Barbara.

But Barbara knows something Sara doesn’t. She knows what can go wrong if you don’t look after your children right. And she’s determined not to let Sara make the same mistakes she did.

An emotional page-turner about motherhood, friendship and family. Guaranteed to take your breath away. Perfect for fans of A Boy Made of Blocks, Jodi Picoult and JoJo Moyes.

A beautiful, moving and compelling story about a mother’s love and how she’d do anything for her child. It’s also a story of family, friendship, letting go and about how there is often so much more going on underneath the surface than we know. This book will break your heart, make you angry and challenge you. Can you paint a different picture and see all the different shades of colour that are waiting to be found?

This was my first time reading this author’s work but it won’t be my last. I’ll admit, part of my interest in this book was the comparison to my favourite author, Jodi Picoult, and I think that is an accurate description of Emma’s beautiful writing style. I was quickly immersed in the story and characters and felt invested in Sara and Ruby.

Sara loves her daughter and loves being a mother. She didn’t have a great upbringing so she’s determined to give Ruby everything she didn’t – which is mostly love and security. She as a difficult time making friends, feels anxious and like everyone is judging both Ruby and her as a mother and is very defensive. She hopes to finally make friends after the move and I enjoyed seeing her find her confidence in herself and her abilities as a mother as she found some lovely friendships over the course of the book. I particularly loved her friendship with Leonard from the art gallery and the positive effect this had on their lives and Ruby’s too.

Reading how Sara felt as she realised something might really be wrong with Ruby and how helpless she felt was heartbreaking. As a mother I could relate to some of what she was feeling.Though I’ve not ever had to go through the trauma of battling to get a diagnosis for my child’s autism – my stepson is autistic and had an easier journey to diagnosis – I do know the helplessness of not knowing how to help them when they’re struggling to deal with their illness and that feeling of loving who they are while aso wishing they weren’t born with something that makes their life harder. I also know the pain of their being something wrong with your child that  you can’t fix. My son was diagnosed with a hole in his heart at a few days old and I’ll never forget coming home from the hospital with a list of what to do if he turned blue or grey and sitting in tears watching him sleep in his moses basket convinced I’d lose the baby I’d struggled to conceive and carry. Thankfully he is fine now but you don’t ever forget those feelings or lose the desire to protect you children.

I didn’t like either Mike or Barbara from the start. Mike is a useless, selfish deadbeat dad. His refusal to ever really parent Ruby was sadly familiar and while I hated him for abandoning his wife and child, I also think the are better without him so I was rooting for Sara to find her strength and realise she’s a better mother without having to walk on eggshells and essential parent him too. Barbara was the typical disapproving mother-in-law who can’t let go of her adult child. My heart went out to Sara having to deal with all her judgments and sly shenanigans, how she ignored Ruby’s problems and wanted to control everything. There was a lot of deja vu for me in her character and I’ll be honest in saying I know that made me dislike her more than I would have otherwise. Even so, I did begin to warm to her after Mike left and I hoped that she would support Sara how she needed.

The characters in this book were multilayered and the author reminds us that there can be reasons for a person’s behaviour, however bad it may seem, by showing us what’s behind the mask. While I liked that this is a reminder that no-one is dimensional or just good or bad, I must admit that I did think that giving Sara the answers to almost everyone’s behaviour difficult to accept. Not everything gets tied up in neat bows and we are often left without closure or an answer for the wrongs others do to us or the reason they aren’t good people. Not everyone will see a problem with their behaviour and make amends, and while we did see this in the book too it was to a lesser extent.

Where I Found You is a wonderfully written book that will stay with me. Though I wouldn’t describe this as a twisty book, it did contain some surprising twists. I thought these were fantastically written and helped create an even greater depth to the book. I loved how it reminds us that life doesn’t work out how we planned or pictured it but that’s okay, we just need to paint a new picture and make the most of the life in front of us. I highly recommend this book. Just make sure to have some tissues handy when you read it. 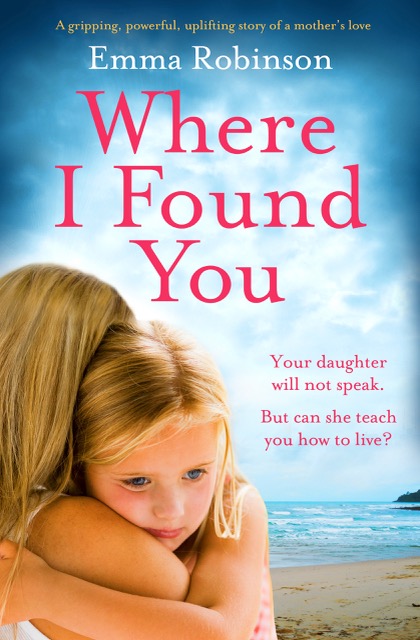 Emma Robinson is the author of three novels about motherhood and female friendship including The Undercover Mother.

Her fourth novel  – Where I Found You – is available to preorder now and will be released on the 16th August 2019.

When she is not writing, Emma is an English teacher and lives in Essex with a patient husband and two children who are an endless source of material.

Hm… if you liked this, you might also like “Shtum” by Jem Lester. I reviewed it on my blog last year.

I think this would make for an interesting read, especially to understand how mothers can not be like Mike and leave a child of special needs.