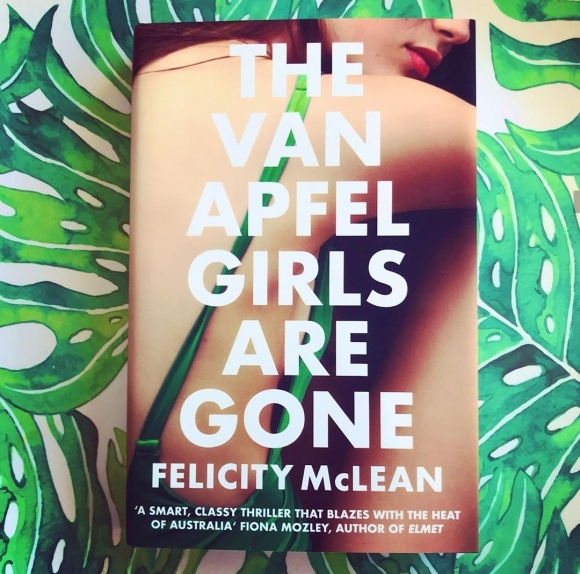 A compulsive, note-perfect debut for fans of The Virgin Suicides and Picnic at Hanging Rock.

‘We lost all three girls that summer. Let them slip away like the words of some half-remembered song and when one came back, she wasn’t the one we were trying to recall to begin with’.

Tikka Malloy was eleven and one-sixth years old during the long summer of 1992, growing up in an isolated suburb in Australia surrounded by encroaching bushland. That summer, the hottest on record, was when the Van Apfel sisters – Hannah, the beautiful Cordelia and Ruth – mysteriously disappeared during the school’s Showstopper concert, held at the outdoor amphitheatre by the river. Did they run away? Were they taken? While the search for the sisters unites the small community, the mystery of their disappearance has never been solved.

Now years later, Tikka has returned home and is beginning to make sense of that strange moment in time. The summer that shaped her. The girls that she never forgot.

The Van Apfel Girls are Gone is a beautifully haunting mystery about childhood, adolescence, secrets and regrets, that takes place over the course of one transformative and unforgettable summer.

Tikka Malloy is haunted by the disappearance of her school friends and neighbours, Hannah, Cordelia and Ruth Van Apfel. They vanished in the sweltering summer of 1992, when Tikka was eleven years old, and despite an extensive search no one ever learned the truth of what happened to the sisters. When Tikka travels back to the small, isolated suburb in Australia she was raised in, she decides it is finally time to make sense of her memories and discern the truth: not only to find out the fate of her friends but also to free herself from the torturous remorse she still feels.

I started reading this book with high hopes as while I have not yet read the books mentioned in the synopsis, I have seen both films and. they were stories that both fascinated and haunted me in a way that is unique to an unsolved mystery. Thankfully, it did not disappoint. I loved this book and find myself still thinking about the mysterious Van Apfel girls.

Hannah, Cordie and Ruth Van Apfel live on the same street as Tikka and her older sister, Laura. Cordie is the one everyone is drawn to: the beauty that shines out, the cool one, the rebellious one. Their parents are religious zealots and are terrified of their violent father. The five girls spend as much time as possible together although to Tikka’s frustration she is often lumped with seven-year-old Ruth, four years her junior, and left out of the older girl’s discussions and plans.

The night the sisters vanished and the events surrounding that night are burned into Tikka’s memory and she’s plagued by guilt and regret. When back in Australia she and her sister discuss the secrets they’ve held for twenty years. It was confusing for Tikka and Laura as they knew what they were seeing was wrong but were so young they didn’t know what to do about it or who, if anyone, they should turn to.

I loved this mesmerising novel. Atmospheric, delightful, captivating, nuanced and nostalgic but also somber, sinister and dire, it had me hooked from the first page. It explores how tragedy can shape our future and how we see things differently with an adult perspective versus a child’s eye. Will we find out what happened to Hannah, Cordie and Ruth? I will leave you to find out for yourself when you read it.

Thank you to NetGalley, Oneworld Publications, Point Blank and Felicity McLean for the chance to read this novel in exchange for an honest review.

*Thank you to Felicity McLean for the permission to use her picture.