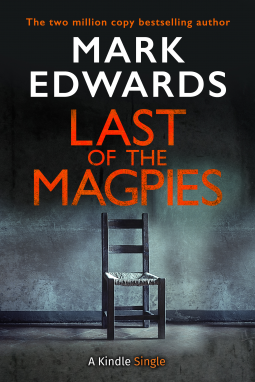 The chilling conclusion to the #1 bestseller The Magpies.

Twelve months ago, Jamie Knight walked straight into Lucy Newton’s trap. Both Jamie and his ex-wife Kirsty barely survived. Now, with the police investigation into Lucy’s disappearance going nowhere, Jamie teams up with a true crime podcaster to track down his nemesis.

But can Jamie persuade Kirsty to help? Can Kirsty forgive him for his past mistakes? And who, if anyone, will survive the final showdown? Featuring extracts from Lucy’s secret memoir, Last of the Magpies brings the trilogy to a shocking conclusion.

Thank you to NetGalley, Thomas & Mercer and Mark Edwards for the chance to read this novel in exchange for an honest review.

Mark Edwards has fast become one of my favourite writers with his chilling psychological thrillers now being a must read for me. So, I was filled with an eager, yet nervous, anticipation before reading this conclusion to his sinister Magpies trilogy.

The gang are all back one last time. Lucy Newton is still missing after her dramatic escape following the terrifying events in Shropshire a year ago. Her victims, Jamie Knight and his ex-wife Kirsty, are still tormented by their experiences and struggling to move on knowing she could strike again at any time. Frustrated that the police appear to be idly sitting by waiting for Lucy to make a mistake, Jamie decides he has to take action. So when his friend suggests talking to true crime podcaster Emma Fox, he agrees in the hope that she’ll be able to do what the police haven’t and Lucy will soon be safely behind bars. Kirsty is taking a different approach. Having seen multiple therapists and tried various ways to try and exorcise herself of the demon of Lucy Newton, she is still haunted by her and decides to sever the small amount of contact she still has with Jamie in the hope that it will help. But the pair are thrown back together into a final showdown with Lucy that they will all be lucky to survive…

Wow! This was a spectacular end to a series I’ve enjoyed. Written from multiple points of view this book spends a lot of time focusing on how Lucy’s nefarious games have affected Jamie and Kirsty, and their struggle to live their lives in the knowledge their tormentor is still out there, biding her time. Lucy’s point of view is for the most part given in the form of the unedited version of her memoir, which is far more damning than what was published. Reading the unfiltered inner-workings of this psychopath’s mind was truly chilling. In Lucy this author has created a villain who if she were real would be up there with the best known psychopathic killers of our age. Those chapters terrified me.

Now let’s discuss the twists (no spoilers I promise). I thought I’d got it sussed but boy was I wrong. The final quarter of the book had me unable to tear myself away as the tension reached its pique and all bets were off on the fates of our main characters. Most of all I loved that as we spent most of the story only knowing about Jamie and Kirsty in the present so that when Lucy’s whereabouts were revealed I had the same jaw-dropping sense of shock that the characters did.

Last of the Magpies ended this trilogy on the high note it deserved. You need to read the previous two books before reading this one for sure as even though it does a great job of catching you up, you’ll be lost without being able to have your memory simply jogged about past events. A quick but brilliant read I would recommend this, and the series, to anyone who loves a well written psychological thriller.

There was an error retrieving images from Instagram. An attempt will be remade in a few minutes.