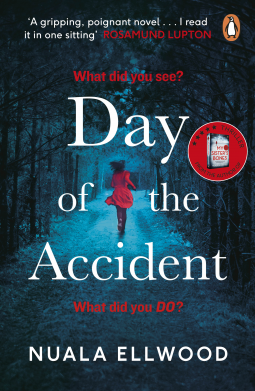 They say you killed….

BUT WHAT IF THEY’RE WRONG?

Sixty seconds after she wakes from a coma, Maggie’s world is torn apart.

The police tell her that her daughter Elspeth is dead. That she drowned when the car Maggie had been driving plunged into the river.  Maggie remembers nothing.

What really happened that day at the river?

Where is Maggie’s husband?

And why can’t she shake the suspicion that somewhere, somehow, her daughter is still alive?

Thank you to Penguin UK, Netgalley and Nuala Ellwood for the chance to read and review this book.

When Maggie Allan wakes in a hospital room she has no idea how or when she got there. She is told that she has been in a coma for ten weeks following a car accident that claimed the life of her daughter Elspeth. Her world shattered, Maggie struggles to accept the truth that her daughter is gone and the further blow that just after the funeral her husband Sean walked out of the hospital and never came back. Her reasons for living lost, Maggie is determined to regain her memory, uncover the truth of what happened that fateful night, and find her husband.

When she’s discharged from hospital Maggie expects to return to the family home but is shocked to discover she has nowhere to go. The house she believed they owned was actually sold by her husband to a company called BH2 Properties seven years ago and he’d been renting it ever since. Then, six weeks ago, he gave notice on the house and then cleared their bank account, leaving her homeless and with less than £200 to her name. Everything they owned is also gone so she has no belongings and none of Elspeth’s things to give her comfort. This extra betrayal gives Maggie an increased determination to find out where Sean is and why he left.

Throughout the book it is clear Maggie is harbouring a secret, something that happened in her teens that she refers to as “the dark thing”. This event led to her attempting suicide, being sent to a psychological ward, suffering from anorexia and forever altered her relationship with her mother. It’s clear to the reader that this incident has affected her entire life but Maggie is in denial, refusing to face or deal with what happened. Barbara, the mother of her boyfriend at the time of the event, has a vicious hatred of Maggie and makes it clear she thinks she should have been locked up for what happened and thinks she killed Elspeth, but we don’t know why.

Overall I liked Maggie as a character. She is flawed but is someone who tries to do the right thing. The big mistake she made as a teenager gave me more empathy for her as she was clearly a desperate young girl who needed guidance but was instead met with anger and accusations. My heart broke for her at the desolation and sense of loss and betrayal she must have felt after being told of Sean’s betrayal. To lose her child and almost her own life in the accident was horrendous but the added loss of her husband and everything she knew.

This was a book that was hard to stop reading. It was gripping from the start and had a multilayered plot full of intrigue and mystery. I found myself full of ideas about what the “dark thing” could have been, why Sean left, what really happened the night of the accident and what the truth was about the letters, but some of them seemed too fantastical to actually be right. The book was so well written that you were never quite sure where it was going or if your theory was right. I liked that in addition to Maggie’s narration we also had another narrator, her daughter who is writing her letters begging her to come save her from this new, awful, place that she’s been left in. These letters are strange as Elspeth’s body was identified so despite Maggie’s denial we know she is dead. Could these be letters she wrote in limbo? Or is there another explanation? I had a few ideas but like with everything else the author kept us guessing right until the end when the big dramatic reveal occurred and blew me away. Even though I’d correctly predicted some of the twists, it was no less shocking and exciting when the truth was unveiled.