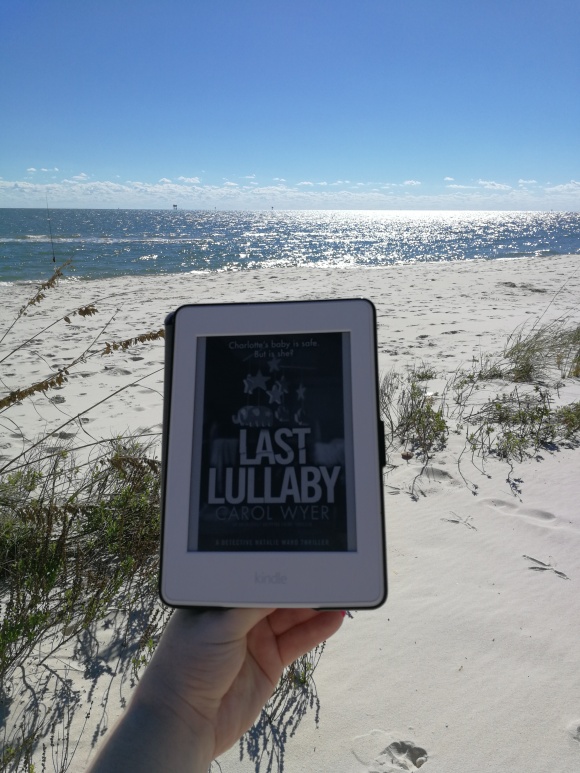 Thank you to NetGalley, Bookoture and Carol Wyer for the chance to read and review this book.

Charlotte’s baby is safe. But is she?

When the body of Charlotte Brannon is discovered by her husband Adam, in their bedroom, Detective Natalie Ward is first on the scene.  The killer has left a chilling calling card: The word ‘Why’ written in blood on the wall.

As Natalie begins to delve deeper into the couple’s lives, she discovers that Adam has a dark past he’s been hiding and she’s sure that the Brannon’s teenage babysitter Inge has secrets of her own.

Then another mother is murdered on her doorstep in front of her young son, the word ‘Why’ scrawled on the wall next to her.

All the key suspects have alibis and with her own marriage hanging by a thread, Natalie is struggling to stay focused on cracking her toughest case yet.

When a young woman and her baby disappear, a member of Natalie’s own team is  put in terrible danger. Can Natalie stop this twisted serial killer and save one of her own before more families are torn apart forever?

Gripping, fast-paced and nail-bitingly tense, this book will send shivers down your spine.  Perfect for fans of Angela Marsons, Rachel Abbott and Karin Slaughter.

I was so excited to be approved for an ARC of this book having loved ‘The Birthday’, which is the first book in the Detective Natalie Ward series, when I read it just a few months ago.  I’d been looking forward to the follow up and was thrilled I didn’t have long to wait.

The book starts with events leading up to the brutal murder of young mum Charlotte Brannon and the discovery of her body by her husband Adam.  There are few clues and Adam’s strange behaviour immediately makes him a likely suspect. I found him a perplexing and unlikeable character and think this was what the author intended: we are supposed to not like him and be suspicious of him.  He protests his innocence in Charlotte’s death immediately but doesn’t help himself at all with his lies and weird behaviour. Out of the other suspects I thought Lee was ambiguous in a deliberate way too and liked that the author had written characters that were seeming to have nothing to do with the crime yet you had this feeling, this unease about them just like the police did.  But also like the police you couldn’t decide if that is because they killed Charlotte or for another reason altogether?

This book differed from ‘The Birthday’ in that over half the book concentrated on the first crime before another one was committed, instead of two occurring quickly. This meant that there was a bit of a lull in the story to some degree, although the author kept you interested by building tension into chasing down the suspects and the information they found out while checking alibis. It kept you gripped and had your mind whirring as you tried to figure out who the culprit was.  When the second murder was committed you felt the anger along with Natalie and her team and their desperation to solve these crimes before anyone else was hurt. As with the previous book I found it hard to pin down a suspect as it is so well written you don’t quite know who’s telling the truth and who people really are, making that big reveal all the more satisfying when it happens.

I loved the sudden introduction quite a way into the book of the conversations between the mysterious Patient X and their Doctor.  Patient X is obviously the killer but we have no idea of their actual identity. We learn more about them as the book goes on and I found those short, sporadic chapters intriguing and an exciting edition to the story that built up the tension and mystery and showed us a glimpse into the sickening psyche of the murderer.

Last Lullaby also concentrated more on the homelives of Natalie and some of her team which I think helps builds up our relationship with them and makes us feel like we’re reading about people we know when we, and they, return for each book in the series. Even so you could still read and enjoy this book as a standalone without any confusion.

Carol Wyer is now one of those authors whose latest releases are a must-read for me.  Her simple but engrossing writing, fantastic characters, vivid crime scenes, and dramatic storylines, make this a crime series you shouldn’t miss. Now I just have to wait for book three….